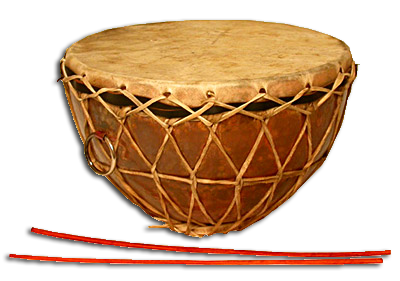 Nagara belongs to the percussion family of musical instruments. They are mostly used in Punjabi and Rajasthani folk music. It is an ancient drum brought in India in the middle ages mostly by Arabs and Persians.

Nagaras were treated as war drums. The loud and thundering beat of the huge drums usually meant that the army was marching into the battle. Before the advent of the cannons the drums were used as well to herald the arrival of the kings and the princess, however nowadays Nagaras are used for all sort of activities.

The Nagara has been called the loudest drums in India. Apart from warfare activities Nagaras were also used in a more peaceful context.

Nagara is the symbol of the sovereignty of truth and righteousness. Only the winner of the war had the right to play it. Nagara is also an integral part of a Takht (Khalsa Throne) and all the Gurudwaras.

Nagara is a conical drum played with two sticks. It is a part of orchestra used by folk music player. Just like the dhols nagaras are used largely in the Punjabi folk music called Bhangra. It is the most import musical instrument used in Bhangras.

Nagaras are huge drums about 2 to 3 feet in diameter and are played with sticks. These were also used to introduce wrestlers and warriors in sports activities in the court of royal kings.

Nagara is made up of animal leather. Usually a buffalo or a camel hide is stretched across the round bowl shaped body. The bowl is iron made, clay or some other metal. Ropes interlock to keep the leather in place

Company of two kettle drums of different in sizes, are also called Nagaras. The smaller one is called Nagari and the larger one is called Nagara. The Nagara is a very loud and low pitched, hence referred as male. The Nagari is higher pitched and is made of goat skin, also referred as female. The term Nagara Is used to pair both this drums. The Nagara is usually around one and half to two times and a half times the size of the Nagari. Nagara usually is played by the dominant hand of the player.